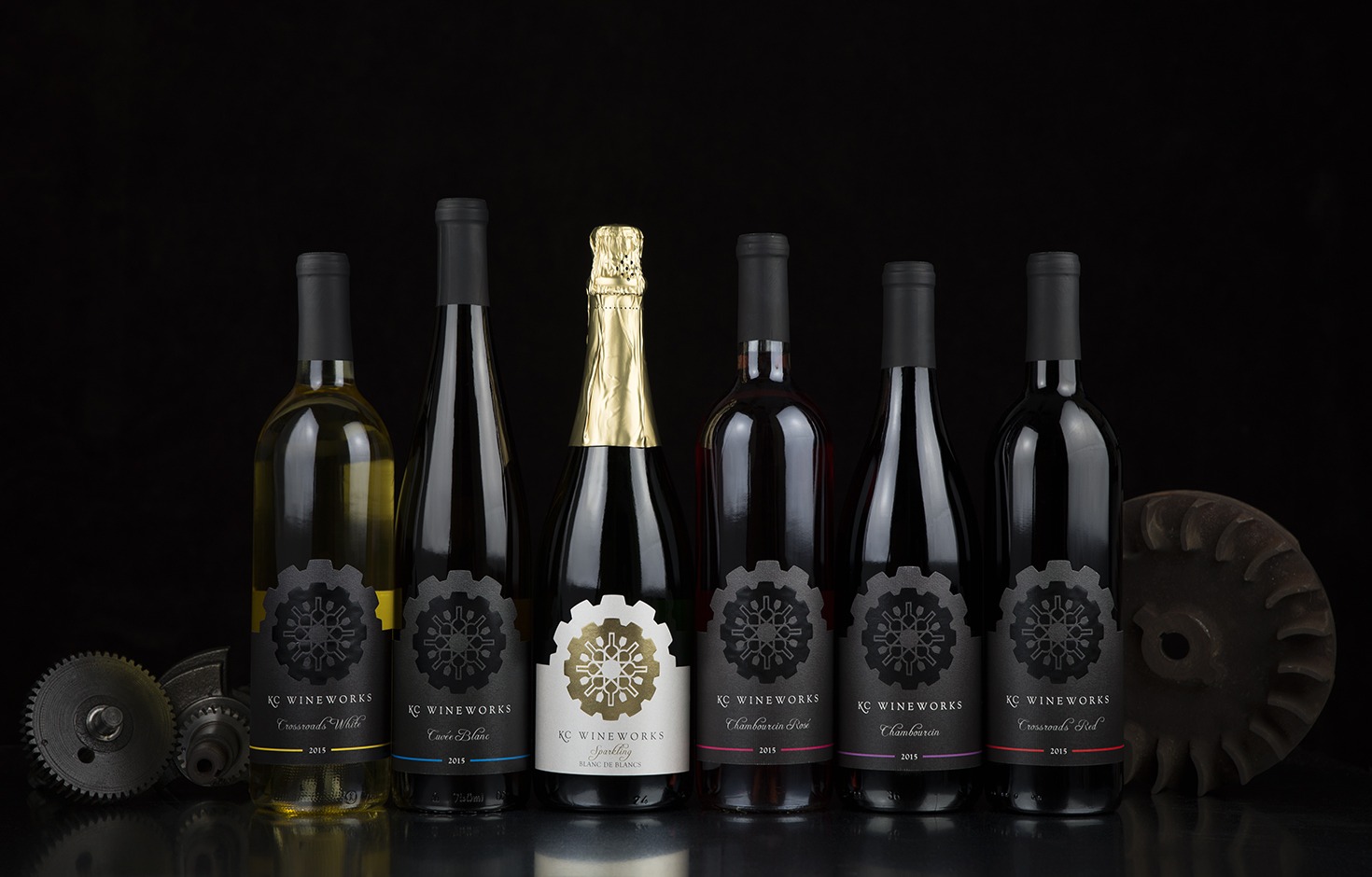 Design choices made at the onset of any new business venture are crucial to defining a brand. When you have multiple decision makers, different generations, and family dynamics, making those choices can become a challenge.

KC Wineworks is the first full-scale production winery to open in the vibrant Crossroads Arts District in Kansas City, Missouri.

Winemaker James Lowery and his wife Lindsay Clausen manage the urban winery. James’ parents, Robert Lowery and Jeanne Hunt are the owners and grow the grapes at Silver Leaf Vineyard about two and a half hours away.

“We all knew there was a lot riding on getting it right the first time,” says Lindsay. “But we’re all independent thinkers with clear visions of what we wanted.”

By choosing Bauerhaus Design, they found a partner in their process. As a neutral party, Designer Becca Ritz managed to blend the family’s divergent ideas. The result is a distinctive brand that embodies the winery’s personality.

“A lot of people think that Missouri can’t produce the caliber of wine found on the west coast or in Italy, France, or Spain,” says Lindsay. KC Wineworks does just that, using only Missouri grapes sourced from the family vineyard and other local growers. “We distinguish ourselves with our style of wine and our support of great local farmers.”

Agreeing on what made their winery unique was easy. Reaching a consensus on their target market and deciding on a logo were more challenging. Becca’s first task was to help guide them in clarifying their ideal consumer. She then had to combine everyone’s opinions on a logo and create a brand image that would satisfy all their tastes.

A Family Business in the Making

Robert Lowery was born and raised on his family’s dairy farm in Macon, Missouri. In the 1970s, he purchased a parcel of that land from his Great Grandfather’s estate. His career took him to the west coast where he met Jeanne. They both worked in the Forestry industry and raised their two children in Washington and Oregon.

While living in that wine-rich region Robert took up winemaking as a hobby. His son James helped and shared his interest. Robert planted a one-acre test vineyard on the land back in Missouri. When he and Jeanne retired in 2009, they moved back to Macon. They added a few more acres of grapes and began selling them commercially.
Meanwhile, James was living in Seattle, Washington. The recession took a toll on his career as an underwater diver in the off-shore oil industry. He relocated to Kansas City with then-girlfriend Lindsay who had a background in the hospitality industry.

“KC Wineworks was our son James’ idea,” says Jeanne. “He wanted to build a winery in downtown Kansas City and use our grapes to make high-quality wine.” They family started working on 2014 and 2015 vintages and opened their doors on April 1, 2016.

“We met Becca Ritz of Bauerhaus Design at several Midwest Wine Conferences,” explains Jeanne. Becca was establishing a niche in the wine and spirits industry. “We all liked her work and felt she was a good fit for us. When we were ready to take the leap to open the winery, we didn’t even bother looking at any other designers.”

As someone familiar with the industry, Becca is also knowledgeable about the Alcohol Tobacco Tax and Trade Bureau’s COLA (Certificate of Label Approval) process. This expertise helps clients remain in compliance.

Robert and Jeanne identify with baby boomers and earlier generations. James and Lindsay are Gen Xers who recognize the need to appeal to millennials. The age difference resulted in two different approaches to a business model.

Jeanne has a slightly different perspective. “Most visitors to the winery might be younger, but when the boomers come, they’re more likely to buy bottles to take home.”

Becca’s design process begins with a comprehensive questionnaire. It helps clients clarify their goals for their brand. Jeanne found Becca’s tools for identifying their target consumer particularly helpful. “It pinpointed the type of wine drinker instead of just the age group,” she says. Lindsay adds, “Becca really gets to know her clients and helps them zone in on their target.”

A LOGO GEARED TOWARD ALL

James came up with the concept of a gear for KC Wineworks logo. It fits with the winery’s urban setting in what was once an industrial area. “In marketing trends,” says Lindsay “readily identifiable icons are everywhere. We wanted a logo that had the potential to be iconic.”

Jeanne admits she wasn’t sold on the idea of the gear at first and would have opted for something more conventional.

The logo went through several versions before it was finalized. “It took some time for the four of us to wrap our minds around the same thing,” says Jeanne. “But Becca was extremely patient with us and was able to pull everyone’s ideas together.”

Lindsay agrees. “She gave us a lot of options. We’d pick the features we liked and she’d incorporate our feedback into her next version.”
Lindsay calls the final logo a “grand slam.” It features James’ gear, representing the urban, somewhat industrial feeling. The winery’s name is in a sophisticated, traditional, serif font with a swooping tail on the letter K. The result is something that appeals to all four. It strikes a balance with an iconic image for millennials, and something refined, yet unpretentious for baby boomers. “It’s very distinctive and we hear a lot of comments about it,” says Jeanne.

In the years since it opened, KC Wineworks has experienced steady growth. In their first nine months, they sold 824 cases of wine. That grew to 1363 cases in 2017 and Jeanne expects it to increase in 2018. Thanks to their logo designed by Bauerhaus, it has exceptional brand awareness and social media engagement without spending money on traditional advertising. “We wanted something that Kansas City could embrace, and we’ve succeeded,” says Lindsay.

“Becca is in tune with our brand and has her finger on the pulse of the industry as it grows and evolves,” says Lindsay. “She brings an infectious excitement to her work and designs. She is an amazing individual and has been a godsend!”

Jeanne agrees. “We couldn’t have done it without her.”